Defence Accounts Department Celebrates 57th DAD Day
“The relationship between the Defence Forces and the Defence Accounts Department (DAD) often resembles that between husband and wife.Occasionally, there are spats and differences but always in the end there is affection and understanding”, said the Chief Guest Lt Gen GS Dhillon, Commandant, ASC Centre & College.He was speaking on the occasion of the “57th DAD Day” celebration on 1st October, 2008, at the office of the Controller of Defence Accounts, Bangalore.“Every time the nation has faced a situation of crisis and urgent procurement were required by the Defence Forces, the DAD has always met the challenge with aplomb”, he said.
Sudhansu Mohanty, Controller of Defence Accounts, Bangalore presided over the function.“Being of service to the Services is a matter of great pride to the Department”, he said.“An Auditor’s job is thankless unenviable and often resented.But the Defence Forces have always appreciated our contribution and taken our job in the correct spirit, and understood that their goals are the very goals that we too pursue”, he said.
Maj Gen PK Chakravorty, VSM, Commandant, Selection Centre (South) was the Guest of Honour.He said, the Defence Accounts Department is doing a wonderful job of payment, accounting, auditing and rendering of financial advice to the Defence Services.
The prizes for various items were distributed by the Chief Guest and Guest of Honour.Shri KN Nagaraja, Asst. Accounts Officer, received the MOTIVATION AWARD for Excellence in individual performance.
The function was attended by all Service officers that included Maj Gen Rajiv Sachdev, Dy. Commandant, ASC Centre & College, Brig. P. Ravindranath, SM, Commander, HQ KK Sub Area and Air Cmde S. Murali Mohan, Commandant & Dental Adviser(Air), Air Force Institute of Dental Sciences.

HERE IS THE SLIDE SHOW OF THAT FUNCTION

As announced earlier we are starting the feature of Precis/Office Note/Letter Drafting for the benefit of the DAD fraternity & SAS candidates in particular. To start with one office note extracted from old SAS paper is given here. Users can post their drafts for evaluation by our expert Officers.

Government of India, Ministry of Finance, department of expenditure vide their letter No. 105/1/204-IC dated 01.03.2004 as conveyed sanction for merger of 50% of dearness allowance/dearness relief with pay / pension to Central Government employees w.e.f 01.04.2004. Various PCsDA / CsDA have raised points of doubts on the following subjects.

1. whether dearness pay is to be treated as basic pay for the purpose of payment of non practicing allowance (NPA)?

Consider that you are working as a Section Officer(A) in the HQrs office, put up an office note bringing out the above issues and seeking a decision on the subject.

'A most uneven playing field - Open the clubhouse to everyone outside'
Posted by PCDA Bangalore at 1:06 PM No comments:

Soon we will be hosting online Precis tutorial for our DAD Fraternity & especially for SAS Candidates.

Details may be awaited.

System Administrator
Posted by PCDA Bangalore at 5:30 PM No comments:

Posted by PCDA Bangalore at 2:43 PM No comments:

This is a test Blog 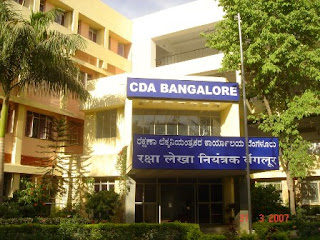 this is our test blog.
Posted by PCDA Bangalore at 10:54 AM 9 comments: 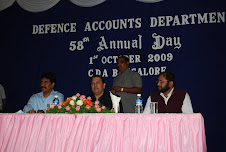